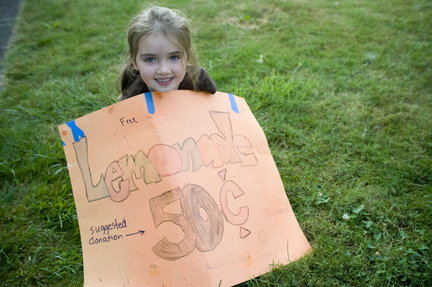 Nanny State-ism at its best. See the cute little girl running the lemonade stand. Where normal look at her and say “Awwww” Oregon’s health inspector shut her down because she didn’t have a license.

Yup. The health inspector made her cry.
Oregon Live has this absurd but true story:

It’s hardly unusual to hear small-business owners gripe about licensing requirements or complain that heavy-handed regulations are driving them into the red.

So when Multnomah County shut down an enterprise last week for operating without a license, you might just sigh and say, there they go again.

Except this entrepreneur was a 7-year-old named Julie Murphy. Her business was a lemonade stand at the Last Thursday monthly art fair in Northeast Portland. The government regulation she violated? Failing to get a $120 temporary restaurant license.

Turns out that kids’ lemonade stands — those constants of summertime — are supposed to get a permit in Oregon, particularly at big events that happen to be patrolled regularly by county health inspectors.

“I understand the reason behind what they’re doing and it’s a neighborhood event, and they’re trying to generate revenue,” said Jon Kawaguchi, environmental health supervisor for the Multnomah County Health Department. “But we still need to put the public’s health first.”

What is wrong with these people. Seriously?

The money quote from the news report is this one:

“Technically, any lemonade stand — even one on your front lawn — must be licensed under state law, said Eric Pippert, the food-borne illness prevention program manager for the state’s public health division.”

How does one even say something like that with a straight face.

And just remember that this had nothing to do with actual health. This was about paying a fee to get a license. That’s all it was about. Money.

Big Government. Making girls cry is worth $150 at a time.