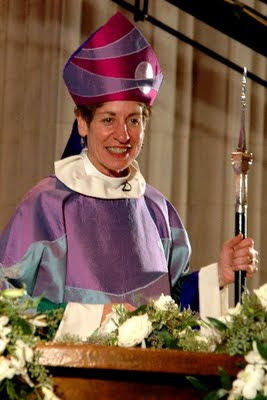 Former Governor, Gay American, and New Jersey Corruptacrat has beeen denied the priesthood by the Episcopalians because, and I quote, he is a “jackass.”

Do I hear an amen?

No longer governor of New Jersey, Jim McGreevey, 53, thought he could become a priest. However, he can’t — at least not yet. The Episcopal Church has denied McGreevey his bid to join the priesthood.

McGreevey drew national attention in August 2004 when he abruptly announced his plans to resign in November 2004. He told the world “I am a gay American” as he stood on stage with his ex-wife Dina. After that, their sensational divorce proceedings played out publicly.
…
Another source said that McGreevey was rejected not for being gay, but for being a “jackass” in his divorce proceedings, which damaged his reputation. They feared that McGreevey was possibly using the clergy as a tool to rebuild his tarnished image rather than focus on God. Both McGreevey and Newark Diocese’s Bishop Mark Beck declined to comment.

I mean how lame do you have to be turned down by the organization headed by the lady in the clown outfit? I mean even people who were turned down for entrance into clown college look down on McGreevey.

How lame? This lame.
Maybe Jefferts Schori didn’t think he was man enough. Who are we to argue?