Where are the Good Christian Non-B!#@hes on TV? 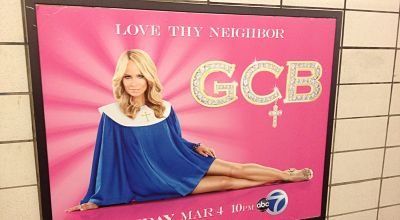 Where are the good Christians on television?

They don’t seem to be on GCB, the new ABC show. GCB stands for Good Christians Bitches from the book of the same name. It mocks Christians and Christianity.

I’ve written about this show before but here’s a little taste from Legalize Jesus:

Based on the trailers, Amanda Vaughn appears to be the only sane member of this community, and she doesn’t appear to be a practicing Christian. When her mother drags her and her children to church, Amanda tells her mother that she “didn’t raise the kids with any particular religion.” While we all know that there are hypocrites in every institution and every religion, GCB uses southern Christian women as the sole, stereotypical examples of self-indulgence, shallowness and hypocrisy.

Other scenes show young girls being encouraged to wear revealing tops. When one mother expresses concern that her daughter‘s old cheerleader uniform is to tight, Chenoweth’s character tells her not to worry “cleavage helps your cross hang straight.” Later at the game, the football team cheers when the girl’s vest pops open.

Clearly, this isn’t exactly a message Christian parents would want to send their daughters.

This show mocks Christians and uses Chenoweth’s public Christianity as a shield.

But it got me wondering. Do you guys know of any characters currently on television who are faithful practicing Christians? Any presented in a positive or even a fair light?

It’s possible I don’t see a whole lot of television so I’ve missed some but please let me know.