Catholicism Going to the Dogs 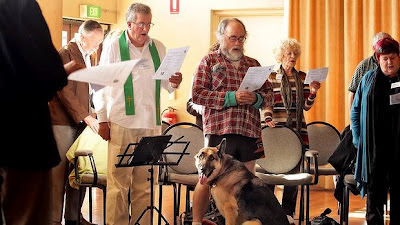 An Australian newspaper is running a story on a dissident Catholic Church that…yup…even gave their version of the blessed sacrament to a dog.

The piece couldn’t be more glowing about a former priest that runs a fake Catholic Church. I assume this kind of stuff goes on in lots of places but feeding the bread to the dog just jumped out at me.

FATHER Greg Reynolds wants his church of dissident Catholics to welcome all – ”every man and his dog”, one might say, risking the non-inclusive language he deplores – but even he was taken aback when that was put to the test during Mass yesterday.

A first-time visitor arrived late at the Inclusive Catholics service in South Yarra with a large and well-trained German shepherd. When the consecrated bread and wine were passed around, the visitor took some bread and fed it to his dog.

Apart from one stifled gasp, those present showed admirable presence of mind – but the dog was not offered the cup!

Father Reynolds, a Melbourne priest for 32 years, launched Inclusive Catholics earlier this year. He now ministers to up to 40 people at fortnightly services alternating between two inner-suburban Protestant churches.
Advertisement

The congregation includes gay men, former priests, abuse victims and many women who feel disenfranchised, but it is optimistic rather than bitter.

Yesterday a woman, Irene Wilson, led the liturgy and another, Emmy Silvius, preached the homily. Two more passed the bread and wine around.

Father Reynolds – his only clerical adornment a green stole around his neck – played as small a role as he could.

Reynolds reportedly had his faculties removed shortly after preaching that it was God’s will to have women priests.

They call themselves a church of “Forward thinkers” and they all criticize the Church as an institution of oppression. They somehow consider themselves the future but everyone in the picture looked pretty old to me. And that’s not even counting in dog years.