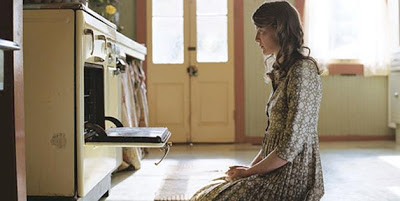 What is the deal with our cultural death fetish?

Vice Magazine’s “Women in Fiction” issue has a photo spread portraying women authors offing themselves like this one below which has a model re-enacting the suicide of Sylvia Plath.

But this isn’t just some random pic. This is supposed to be selling clothes. And reportedly the magazine points out that the tights the model is wearing were made by a designer who hanged herself. Seriously.

Now there’s been a bit of an uproar over this so Vice has quietly and quickly deleted it from their website but it’s still in their magazine. They put out a statement defending it while issuing one of those ‘sorry if you’re offended’ apologies.

“Last Words” is a fashion spread featuring models reenacting the suicides of female authors who tragically ended their own lives. It is part of our 2013 Fiction Issue (http://www.vice.com/magazine/20/6), one that is entirely dedicated to female writers, photographers, illustrators, painters, and other contributors.

The fashion spreads in VICE magazine are always unconventional and approached with an art editorial point-of-view rather than a typical fashion photo-editorial one. Our main goal is to create artful images, with the fashion message following, rather than leading.

“Last Words” was created in this tradition and focused on the demise of a set of writers whose lives we very much wish weren’t cut tragically short, especially at their own hands. We will no longer display “Last Words” on our website and apologize to anyone who was hurt or offended.

Yeah, they apologize if their attempt to make suicide sexy to teens offended you.