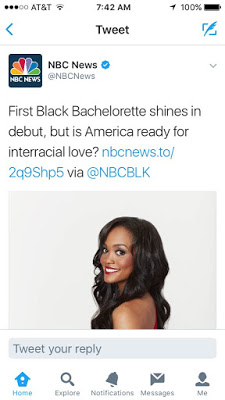 First came this 1960’s ad from NBC to promote The Bachelorette. I mean seriously, do they really think this is an issue in America today? They’re so #woke it’s like they’ve been in a coma for 60 years. James T. Kirk was canoodling with green chicks in outer space fifty years ago on television.

This tells you all you need to know about what they think about race. Yeah yeah, I’ve been seeing some hot takes about what it says about what they think about Americans. And there is that. But it’s actually not that. Not totally. They can’t get past race. Nobody I know would even lift an eyebrow at this girl dating any kind of man she wanted. Not an eyebrow. It wouldn’t even be a thought. But to these guys, race is everything. They can’t stop thinking about it. They’re obsessed with it. They don’t see a beautiful young woman. They see a beautiful black woman who might date a white guy. They’re uncomfortable with it. And then they project that discomfort onto sane Americans and actually pat themselves on the back because they think that if they’re uncomfortable with it then regular Americans are going to flip about it.

But the Newsweek doubled down on crazy. I can’t actually believe they put this out there. They later removed it but holy Klan tweet Batman.

As Trump would say – Sad. Sad. Not good.