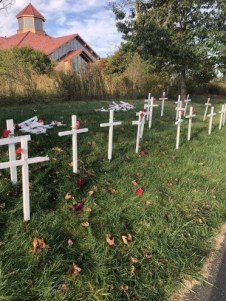 Nothing to see here.

Our Lady of Guadalupe in Buckingham has again had its pro-life display vandalized.

In Central Bucks County, where yard signs assure that “Hate Has No Home Here,” acts of hatred are perpetrated on the people of Our Lady of Guadalupe, a Catholic parish in Buckingham Township. It’s been happening for years.

The latest came last weekend. Sometime on Saturday Oct. 12 and into Sunday the 13th, about 40 of 61 small, white pro-life crosses were destroyed. The crosses, each adorned with a red flower, were set on parish property along busy Route 413 near the intersection at Cold Spring Creamery Road.

“They were broken up, smashed to pieces, and scattered,” said Father Robert Ianelli, parochial vicar.

A pair of signs urging a halt to abortion were stolen, too, Father Ianelli said.

“It’s happened before, but this time the damage was over the top, for sure,” he said.

The crosses were yanked, broken and piled in what appears to be some sort of rage.

The vandalism at OLG usually happens in the fall, in October, when the pro-life display is set out. Catholic parishes throughout Bucks County have similar displays. They are comprised of low, white crosses accompanied with signs informing passers-by that each cross represents 1 million surgical abortions since 1973, the year the U.S. Supreme Court ruled that abortion was legal in all states. Catholics know that amounts to 61 million procedures, which has resulted in the aborting of one in every three Americans over the last 46 years.

Please recall that this is a random everyday for the Church at this point. Churches throughout the world have been threatened, torched, and vandalized for years but two guys toss a pagan idol into the Tiber and it’s international news.