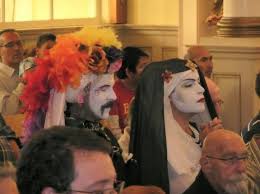 So Nancy Pelosi lied about receiving Communion at Mass.  I know politicians lie. I get it. But to lie about attending Mass and receiving the Body and Blood of Christ? That seems a little far, doesn’t it?

House Speaker Nancy Pelosi’s office is walking back a comment she made on camera appearing to admit she violated San Francisco’s months-long ban on indoor masses.

“Well, I have been to church in San Francisco recently and I did receive communion,” Pelosi said on Friday.

“The church maybe holds 250 people. There were probably 12 people there. Here, there, there… very, very, very spaced. But that was it.”The Catholic News Agency reports that Speaker Pelosi’s office released a statement saying she “misspoke.”“The Speaker misspoke. She has not been in San Francisco since September 5 due to ongoing talks around COVID-19 relief and appropriations,” Pelosi’s spokesperson Drew Hammill told CNA in a statement.He added that Pelosi has been participating in church services through virtual masses.

Let’s be clear. She absolutely lied, right?  She said she received Communion. Then she said the Church was very very very spaced. And then it turns out she watched it online.

This is not an actual depiction of Nancy Pelosi attending Mass. It just seems like one. We know this because she wasn’t actually there.