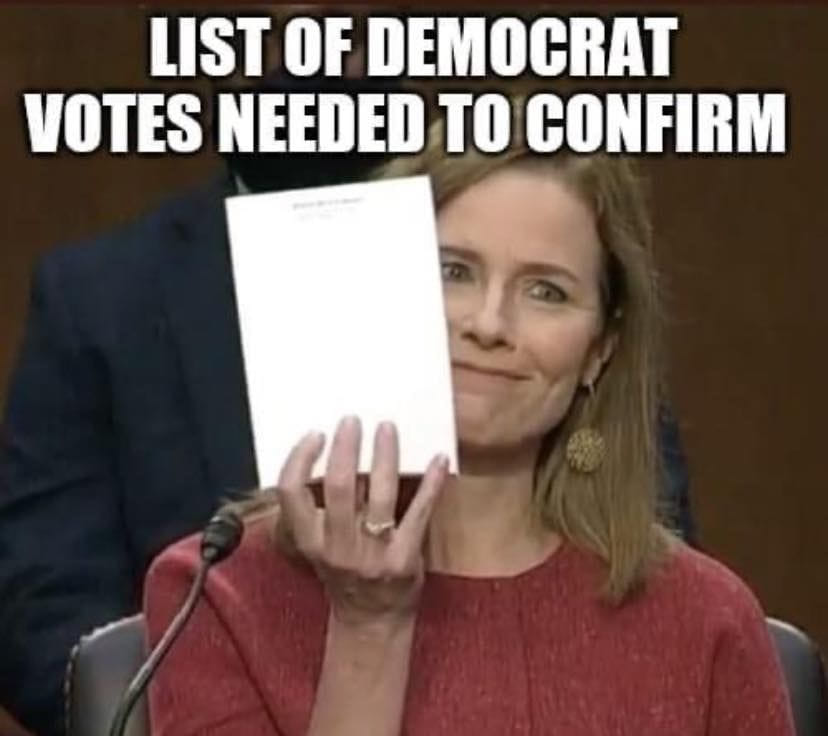 I am here to officially pronounce the judicial committee’s hearing on Amy Coney Barrett’s nomination to the U.S. Supreme Court as absolutely deranged and demented stark raving insanity.

I know what you’re saying. “C’mon Matt, it’s not that bad.”
It is that bad. And more.
6) Insanity arrived early when Senator Sheldon Whitehouse began his questioning of ACB by forgetting to ask a question. The little known senator was so enamored that the cameras were actually focused on someone named Sheldon that he lectured ACB for thirty minutes and absolutely forgot to ask a question. On top of that he had a cardboard presentation like this was the third grade. No word yet on whether he laminated them later and put them on his mom’s refrigerator..
5) Once insanity was fully in the room and running around while on fire, Senator Amy Klobuchar took the mic. Being the legal scholar she is, she asked if Roe v. Wade was not just a precedent but a “SUPER PRECEDENT.” A super precedent for those lacking the technical jargon of a superior legal mind such as Amy Klobuchar is one that is stronger than a precedent but falls just slightly short of being a super duper precedent- which is a legal term that involves wearing a cape and possibly ingesting hallucinogenics.
Barrett easily dismissed this question by essentially saying, “I have absolutely no idea what word jumble that just spat out of the hole atop your chin. Could you speak grownup please?” That’s not exactly what she said but that’s pretty much what she said. ACB refused to answer by asking Amy Klobuchar to define exactly what a super precedent was. Klobuchar pretended to laugh and couldn’t think of a response so just told her that she too really wants to be on the Supreme Court. Seriously, that’s what she said. She said she always thought she might be where ACB was sitting one day. I’m pretty sure that was the moment that ACB decided to ask for a security escort to her car that night.
4) Senator Dianne Feinstein, who had infamously worried that the Catholic “dogma lived loudly” in ACB,  had planned a brilliant series of questions ready meant to entrap ACB. Oh, there was no way the nominee could squirrel out of this brilliantly laid out series of questions. She asked ACB if she agreed with the late Justice Antonin Scalia that Roe v. Wade was wrongly decided and should be overturned.
Amy Coney Barrett repeated the line that every nominee says. She said she can’t comment how she would rule on a case that could come before the court because that could prejudice the case.
But Senator Feinstein was surely prepared for this answer as every nominee since Elena Kagan said the same exact thing when questioned about this same exact subject. Ah, but the Gordian knot of logical argument was tightening and now Senator Feinstein had ACB exactly where she wanted her. She then asked the question that would surely stump ACB by…asking the same exact question again to which she responded the same exact way.
OK. Maybe Senator Feinstein had just lost her place on her list of questions. Here it comes. Get ready. The senator from California then brought forth the question of all questions that would shine the searing light of truth throughout the chamber by…asking the same exact question again.
Uh-Oh. Is she ok? Amy Coney Barrett essentially responded the same way, now trying to smile a little because she realized she was dealing with someone who needed a little reassuring.
Running out of time, Feinstein then mumbled one last question. Huh? What was that? Oh. It was the same exact question. Things were just weird at that moment because Amy Coney Barrett then responded the same way but hurried her answer because she feared that Feinstein might be a little late for her meds.
3) Senator Patrick Leahy, who weirdly always sounds like he’s gargling mouthwash, then asked if ACB would recuse herself from ruling on the inevitable election case coming to the US Supreme Court. Why? Oh, because she was nominated by the president. Leahy had obviously forgotten that every single justice is nominated by the president. But Orange Man Bad so…
But I know what you’re thinking. This isn’t that bad, Matt. Politicians grandstanded and asked stupid questions. That’s called Tuesday on the Hill. I mean, c’mon it’s not like a senator asked her on national television if she was a racist or something.
2) A senator asked her on national television if she was a racist. Senator Corey “Spartacus” Booker asked Amy Coney Barrett if she supported racism. Yup. Booker asked the mother of two black children if she condemned white supremacy.
Alright, we can all agree that’s pretty bad. Funny thing though. When I first read that headline that she was asked if she was “racist” I thought it said “rapist.” That would’ve been totally out of bounds, huh?
1) Senator Maize Hirono asked Amy Coney Barrett, mother of seven, if she was a rapist. A rapist! How Amy COney Barrett didn’t just turn the table over at that point is a lesson of self restraint that will echo through the ages. My buddy Jason Jones suggested we should start spelling “crazy” with an “ie” at the end in honor of just how crazie Mazie Hirono actually proved herself to be in that moment.
I’m sure today holds more surprises. Maybe I’ll update this later as Democrats get more desperate they usually get nastier. Keep ACB in your prayers.
But remember: