Godzilla vs. Kong. Worst Movie Ever 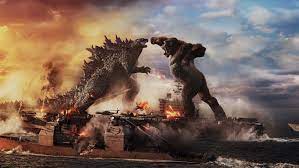 Holy wow. My son wanted to watch Godzilla vs. Kong. So I thought that maybe we’d sit down and bond over a fun silly action monster movie.

I’ve never felt so angry at my son.

This is the worst movie I’ve ever seen. And it’s not even close. Characters are walking in and out of scenes and I don’t know why they’re there or how they even got there. There’s some good actors here but the movie gives them nothing to do. I mean, absolutely nothing. In fact, there’s so many characters running around accomplishing absolutely nothing that you don’t feel at home with any of them.

The Milly Bobby Brown character is sleuthing around the entire movie to figure everything out but she accomplishes literally nothing. She just gets a front row seat to the carnage.

Characters walk in and out of major top secret high tech facilities that are up to major no good without any security. Every once in a while they tip toe or peek around a corner but that’s the only nod to the fact that this is dangerous or they might get caught.

Oh, and there’s a little girl who’s connected to Kong. Like emotionally. She calms him as they’re shipping him around the world on boat or being carried by helicopters. They presumably have this connection so that there’s an excuse for why the child has to come on all these adventures to Antarctica and then literally to the center of the Earth. I know Covid has closed many schools down but doesn’t this kid have to do zoom school or nothing? Nah, we’ll take her to the center of the Earth where monsters rule so we can put her life in danger.

But that’s the other thing. In no moment do you feel any of the humans that aren’t bad guys are in any actual danger. And that’s pretty hard to do considering they’re surrounded by monsters much of the time.

Oh, and Kong can talk using sign language. Yup. He can talk now although this major turn of events is actually pretty uneventful because it turns out that the giant monkey doesn’t have anything to say. I mean, nothing. He says “Home” a few times but that’s it.

So about halfway through the movie, all of a sudden we go into a portal and we’re in space ships. WTH? But these space ships aren’t just ordinary space ships. They’re easy to fly because a character who has no experience with them flies the good guys out of trouble when needed most.

The real bad guy, just in case you were worried, is big business. Yup. It’s not the two giant monsters destroying Hong Kong, it’s the evil businessman. And in the end, we’ve got a bad guy monologuing while the big bad robot he created to kill Kong and Godzilla “sneaks” up behind him.

Scooby Doo has more entertaining and surprising plot twists than this piece of awfulness.

FYI, I’m taking away the remote from my son. He will no longer be allowed to make movie decisions.

He said he enjoyed it because watching terrible movies makes him grateful for good movies. I’m gonna’ have his DNA checked. I don’t think he’s mine.