“Othering” Christians is the Path to Persecution 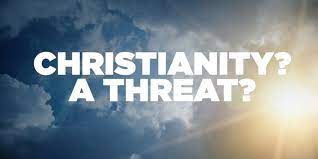 Christians should be in the world but not of this world. Throughout history, that has sometimes made Christians easy to locate and persecute. There is a certain “otherness” that we expect. We even aspire to it. When you accept the proposition that God created the world as an act of love and sent His only Son to die for our sins it should have a visible impact on your life.

In fact it is that difference that is often our best evangelization tool. When someone sees how you deal with others and wants to know why you seem more content or more giving then you let them know about Jesus.

So “otherness” is sorta’ wrapped up in the job of being a Christian. But, at times, that attention that being a public Christian can bring can take on the form of crosshairs. I thought of that because I read a piece that originally appeared in Time Magazine (yes, it still exists) titled “The Growing Anti-Democratic Threat of Christian Nationalism in the U.S.” by two American sociology professors.

Why? Because they say Christians pose a “threat” due to their “violent, anti-democratic impulses.”

The authors even urge the country to “confront Christian nationalism.”

Confronting violence. This seems like a precursor to war, doesn’t it?

Here’s a few graphs just so you don’t think I’m taking this stuff out of context:

“Viewing the problematic history of limiting who can vote in the United States alongside our recent findings underscore the clear and present danger Christian nationalism poses to democracy. Efforts to neutralize the political threat of minority groups by subverting their ability to vote strikes at the very heart of the idea of fair and free elections.

This threat will not disappear, no matter which party controls the three branches of the federal government. Christian nationalism will not fade into obscurity any time soon. It has survived over decades and permeates much of our civic life and culture. The violent, anti-democratic impulses of Christian nationalism still course through the veins of our body politic, waiting for the next opportunistic strongman willing to put them to use.

Just as the January 6th insurrection and recent voting laws are not aberrations but a reflection of similar events in our nation’s history, they too may be a bellwether of events to come if we do not acknowledge and confront Christian nationalism. Our democracy is at stake.”

OK. So who is a Christian nationalist? It seems that if they are a “clear and present danger” that must be confronted then we should at least know what to look for, right?

“In order to understand what led to the deadly Capitol insurrection and the spate of proposed voting laws we must account for the influence of Christian nationalism, a political theology that fuses American identity with an ultra-conservative strain of Christianity. But this Christianity is something more than the orthodox Christianity of ancient creeds; it is more of an ethnic Christian-ism. In its most extreme form it legitimizes the type of violence we saw on Jan. 6 and the recent flood of voting restrictions. Violence and legislation not in service of democracy, but instead for fundamentally anti-democratic goals.

In our book, Taking America Back for God: Christian Nationalism in the United States, we use several large, national surveys of Americans collected over the last decade to show that about 20 percent of Americans―those we call “Ambassadors”―strongly embrace Christian nationalism.“

I’m wondering something. When they refer to the “deadly” Capitol insurrection I assume they’re referring to the young unarmed Ashli Babbitt who was killed by an as of yet still unidentified police officer. Is that what they mean by “deadly?”

But let’s just think about this. These two college professors are essentially looking for a declaration of war on twenty percent of the country. That seems a bit extreme, doesn’t it? It’s not. It’s been mainstreamed.

The media has pushed this take to the point where polls indicate 20% of registered voters said the religiously based nationalism was a “critical threat” and 27% said it was an “important but not critical threat.” That’s 47% who believe Christians are a threat. To be clear, they’re talking about anyone who is Christian and conservative.

At the heart of this debate is a question as to whether God created us or are we accidents of randomness in uncaring space? Is life sacred? Is gender real? Do individuals have God given rights or are liberties something the government allows?

These are not unimportant questions. For a culture to survive, its people must agree on certain premises. We no longer have agreement. We no longer speak the same language. We no longer can even agree on what the term “life” or “human” means.