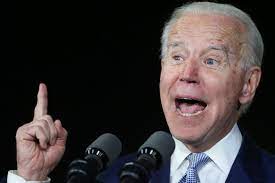 Well it happened. The President of the United States introduced a budget that replaces the term “mother” with “birthing people” in reference to maternal health programs.

Yes. They used the term “maternal” but not “women.” Try to figure that one out.

This is a special kind of insanity which leads me once again to saying that the great responsibility we have as Christians is merely staying somewhat sane as a contrast to the lunacy escalating around us. People will be drawn to those who stay sane.

The thing is, the left knows it’s insane but it’s the only way to separate themselves out as more virtuous. It sets Christians apart as “the other” and makes them easy to persecute. It’s coming.

I will once again remind you that Joe Biden is a “devout Catholic.” I mean, you know the old biblical statement “God created them birthing person and non-birthing person,” don’t you? And if you don’t believe he’s a devout Catholic he’ll shove these rosary beads down your throat.