Woman Sues McDonalds for Luring her Into Breaking Lenten Fast 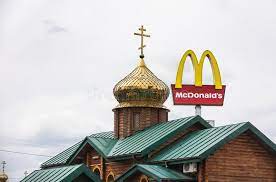 When God asked Adam what he’d been up to, he responded by blaming Eve, who, in turn, blamed the serpent.

This story is the sad modern updating of that story that shows that absolutely nothing in human nature has changed. Ksenia Ovchinnikova claims she was lured into indulging in a McDonald’s hamburger during Lent and now she’s suing the burger giant!!!

I’d love to hear this woman in confession explaining why each of her sins weren’t really her fault.

If you ask me, McDonald’s should make this the centerpiece of their next ad campaign. “It’s sinfully good!!!” or “It’s Mac-religious!!!” Get it?

“When I saw an advertising banner — I could not help myself,” said Ovchinnikova, an orthodox Christian, according to Fox Business.

“The unhappy meal reportedly occurred in April 2019, while the Omsk native was observing Lent, a strict period in which devout Christians are expected to forgo meat, meat by-products, poultry, eggs, and dairy.

Ovchinnikova claims she had adhered to the belt-tightening custom for a month when she saw an enticing Golden Arches banner advertising a cheeseburger and chicken nuggets. Despite successfully fasting for the last 16 years, the hangry woman couldn’t resist and “visited McDonald’s and bought a cheeseburger,” the repentant religious follower admitted in her statement.”

Ovchinnikova, who is reportedly suing McDonald’s for $14 as chomp-ensation for breaching consumer protection law and insulting her religious feelings.

If you ask me, she should be suing for a lot more. McDonalds settled with someone because they spilled their hot coffee on themselves. Seems to me you could make some bank off of this.

I do, however, have to question her taste. If I’m breaking my Lenten fast, is McDonald’s gonna’ be my cheat meal. Seems to me you need to aim a little higher. Try Chick-Fil-A.