What the Left Can’t Control It Destroys 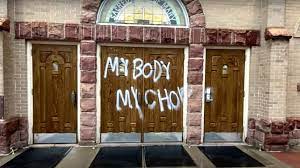 So we should take it as good news that they’re still attacking the Catholic Church. That means there’s still hope.

If they’re attacking Catholic Churches that means they’re not in complete control yet despite what it may seem like sometimes.

You might despair when you read Pope Francis’ latest. You might want to rip your hair out when your read Jesuitical sophistry such as this:

“Over the weekend three statues at St. Anthony’s Catholic Church in Harlingen were vandalized. The church reported two angel statues were stolen and one statue of the Virgin Mary was toppled over.”

Say a prayer that the Church will always be seen as a threat to those who spread darkness and violence. So all this vandalism and invective being tossed at the Church could be considered good news.

That’s a pretty good way to look at things, isn’t it? I made my own day a little bit brighter.