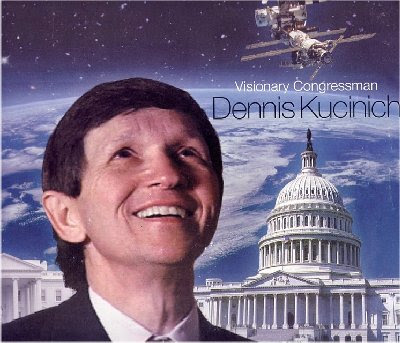 I knew Dennis Kucinich was crazy but…I had no idea he was this crazy. So kudos to all Democrats who knew enough not to give him any support in the Democratic Primary.

The eternally loopy Shirley Maclaine in her new book “Sage-Ing While Age-Ing” writes of Kucinich’s close encounter, according to the Cleveland Plain-Dealer.

“He had a close sighting over my home in Graham, Washington, when I lived there. Dennis found his encounter extremely moving. The smell of roses drew him out to my balcony where, when he looked up, he saw a gigantic triangular craft, silent, and observing him. It hovered, soundless, for ten minutes or so, and sped away with a speed he couldn’t comprehend. He said he felt a connection in his heart and heard directions in his mind.”

WOW. That’s all I can say. Wow. Kucinich not only seeing a UFO but hearing directions.

Let me get this straight. Creatures from millions of miles away travel to Earth to see…Dennis Kucinich. I’m losing respect for aliens by the minute.