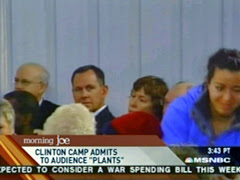 Sen. Hillary Rodham Clinton said Sunday that she had no idea that her presidential campaign had planted questions during public appearances. “It was news to me,” Clinton said, according to Fox News. “And neither I nor my campaign approve of that. And it will certainly not be tolerated.”

Every campaign does it. She got caught. What are the chances of someone in a crowd being told to ask a specific question and her actually calling on that exact person. Come on. Also, could you imagine a scenario where a staffer would plant a question the candidate wasn’t ready for?

As someone who has run campaigns I’ve seen it hundreds of times. If you hear a candidate on a radio show, know that there are three people assigned the job of getting on that radio show with a question that was prearranged.

And in any public appearance there are planted questions. That’s how it works.

What is more important here is that the media has taken out the knives on Hillary finally treating her as a candidate and not royalty. I still believe that Hillary will be our next President (God help us) but I’m glad to see the media at least doing its job -just a little.