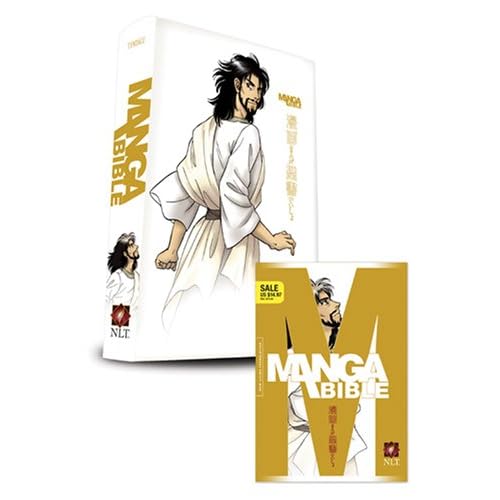 The Bible is getting the Manga graphic novel treatment, says the NY Times. But it seems they found the story didn’t move fast enough so a couple of little things get left on the cutting room floor – like the Sermon on the Mount. Not enough action.

Ajinbayo Akinsiku wants the world to know Jesus Christ, just not the gentle, blue-eyed Christ of old Hollywood movies and illustrated Bibles. “For the unchurched, the book is to show that this thing, the Bible, is still relevant,” Mr. Akinsiku said.
Mr. Akinsiku says his Son of God is “a samurai stranger who’s come to town, in silhouette,” here to shake things up in a new, much-abridged version of the Bible.

“We present things in a very brazen way,” said Mr. Akinsiku, who hopes to become an Anglican priest. Here’s how he describes our Lord and Savior: “Christ is a hard guy, seeking revolution and revolt, a tough guy.”

Sounds to me like he understands the bible very well, right?

While known for characters with big eyes and catwalk poses, manga is also defined by a laconic, cinematic style, with characters often doing more than talking.

In a blurb for the Manga Bible, which is published by Doubleday, the archbishop of Canterbury, the Most Rev. Rowan Williams, is quoted as saying, “It will convey the shock and freshness of the Bible in a unique way.”

I got to tell you that every time that guy opens his mouth I laugh. It’s like he’s trying to be irrelevant.

No doubt. The Times actually describe the heroes of the comic book bible as “heroes look and sound like skateboarders in Bedouin gear.

Here’s some snippets: Noah gets tripped up counting the animals in the Ark: “That’s 11,344 animals? Arggh! I’ve lost count again. I’m going to have to start from scratch!”

Abraham rides a horse out of an explosion to save Lot. Og, king of Bashan, looms like an early Darth Vader.

The goal of the Bibles is not just to win people to Christ, but to particular ways of thinking, said Jason BeDuhn, associate professor of religious studies at Northern Arizona University. Mr. Akinsiku said the biblical message he wanted to underscore was justice, especially for the poor.

His book has been criticized by some manga bloggers as too wordy. Mr. Akinsiku said the exposition gave readers a quick understanding of the Bible. His next project is a manga life of Christ. He has 300 pages to lay it out, which means there will be a lot more action, a lot less talking, something like Clint Eastwood in the Galilee.

I’m picturing it now. Jesus tears himself off the cross, looks menacingly up at the Roman guards, Mary throws him an AK-47 and he says, “I’d like you folks to meet the right hand of God” as he opens fire.