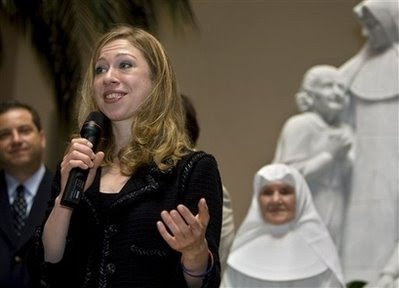 With little more than a month to go before Puerto Rico’s June 1 primary, the former first daughter Chelsea Clinton toured the U.S. territory’s capital of San Juan and shook hands with well-wishers, posed for snapshots and tried to charm voters on behalf of Sen. Hillary Rodham Clinton of New York, says the Associated Press.

In the day’s first campaign push, the 28-year-old met with roughly 250 senior citizens at a residence run by an order of Catholic nuns. She touted her mother’s health care proposals and stressed her electability.

Ok. Come on now. I’m shocked when I hear that Chelsea or Obama came to Villanova or Georgetown but a senior home run by nuns?! What is the deal there?

Here’s my favorite line from the article: “Later Tuesday, Clinton toured the colonial district of Old San Juan. She also was scheduled to meet with a Christian youth group, followed by a visit to a gay rights organization.”

Do I have to start a Cardinal Newman Society for old age homes now? I really don’t want to. I’m very busy. Am I crazy here or are these nuns off their rockers?