Why Are Atheists Obsessed With Religion? 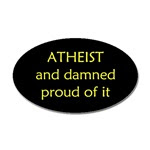 Atheism is defined as “the doctrine or belief that there is no God” or simply “disbelief in the existence of a supreme being or beings.”

Now that does not even come close to today’s atheism. Today’s atheists are on the march and in your face. (I wish some Christians had the fire of evangelism that so many atheists seem to feel.)

Atheism, in reality, is simply an affirmation in what you don’t believe. Now, I don’t run around constantly telling people things I don’t believe. I find it much more fun to talk about what I do believe. In fact, I run a whole darn blog called Creative Minority Report which could be titled THINGS I DO BELIEVE.

But atheism has become not simply a vacuum. It is now an active hatred of all things sacred. Look at these bumper stickers. They say nothing about what they believe. It is an attack. (Did you notice how the “Atheist family on board” only had one kid?)

I read in the newspaper about a new bumper sticker which said, “So many Christians, so few lions.”

Every Christian blogger has run into the wandering evangelical atheists which drop by to throw insults at you and say how much smarter they are than you. It happens all the time. Now I can honestly tell you, I’ve never, not once, gone to an atheist web site to insult anyone. I don’t even know if there are atheist web sites unless you count Barack Obama’s campaign website. (I’m kidding…kind of)

I think, however, they are feeling that the tide is turning toward them. They seem to think that with just one last great push they can set society free from the constraints of Christianity.

But I will say, they do this at their own peril. Remember all the schools, hospitals, and adoption centers that Church runs. How many atheist hospitals are there? (You can’t count abortion clinics!)

And all the precious rights you shout about are yours only because they are not a gift of the government. They are God-given. Take God out of the situation and your rights become negotiable by powerful interests. I’ll just say beware if what you’re attacking and attempting to break is exactly what you’re standing on.