The Most Offensive Mag Cover…Ever 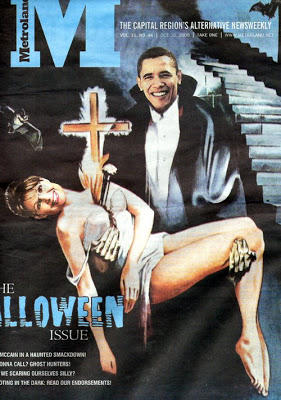 The latest Halloween issue of a left-leaning New York news magazine called MetroLand shows a smiling Barack Obama as a vampire carrying a scantily clad Sarah Palin who has been pierced with a spike through her heart, according to World Net Daily.

And what’s with the cross hovering above the wound in “Palin’s” chest? What’s it even doing there?

I know these small magazines have to sometimes shock a little to get noticed but this is blatantly offensive on just about every level. It’s sexist and anti-Christian. But it’s OK because it’s just against conservatives. Now, I have to wonder when the Fairness doctrine passes will these dopes have to run a cover of Nancy Pelosi in skimpy clothes being killed in some grotesque way. Something tells me the combination of Pelosi and skimpy clothes won’t boost circulation a whole lot.

For the final ‘we’re all doomed…doomed I tell ya’ coup de grace, the cover has ignited controversy but the paper is saying it’s getting some feedback calling it the best cover ever. What a world. What a world…