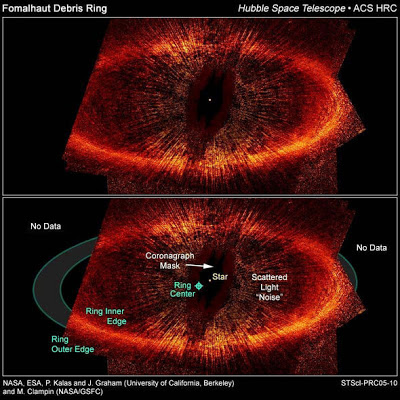 So the Hubble telescope snaps these photos recently and then they go about calmly diagramming it.

No. That is unacceptable. You know, you get all these bespectacled geeks around a telescope they lose their common sense. Did you see that thing? I mean, guys, did you see Lord of the Rings? Ha! They’re geeks, of course they saw LOTR. (And I’ll bet some of them actually dressed as characters) Well, do you not know Sauron when you see him?

Look, when you gaze upon something like this just floating out there in the middle of space you don’t stop and snap pictures. You turn the telescope away, hope your eyes don’t burn in your head, swear off looking into space, apologize to it for even seeing it, and pray to God that when you saw it it didn’t see you back.

Do these guys not recognize when they’re in the first scene of a horror movie?

Act One: Stupid scientists stumble upon something horrible and instead of utilizing common sense, they act all geeky and make things a lot worse for the world.

Act Three: Two short fat guys climb up a volcano and throw some jewelry down its gullet.

Sometimes I think people who knew a lot less back in the old days maybe knew a lot more. You know how on old nautical maps, cartographers inscribed uncharted regions of Earth with the legend “Here Be Monsters.” Well I’m thinking that maybe this is one of the areas that when someone asks, “Hey, what’s over in this little space quadrant?” someone from NASA should just say, “Here Be Monsters. We don’t want to go there. We don’t want to talk about it. Didn’t you see Lord of the Rings?”