Priest Compares Self to Jesus, UFO Cult Rallies To his Cause 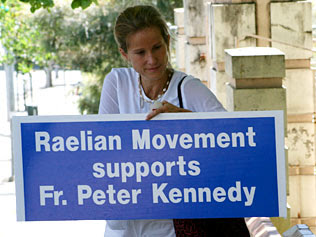 OK. There are two ways that Father Peter Kennedy should’ve known that he was on the wrong side of his argument with the Catholic Church.

1) He resorted to comparing himself to Jesus.

Catholic priest Father Peter Kennedy, you might remember, has long been in a dustup with the Church as he’s focused almost exclusively on social justice while eschewing spirituality. Fr. Kennedy has allowed women to preach at St Mary’s Church and he often blesses homosexual couples.

But other than that he’s probably really great!

Well, recently, according to Perth News, Fr. Kennedy told a packed church that it’s O.K. for him to be criticized because you know who was also criticized. That’s right your savior and mine Jesus Christ.

Yeah. He went there.

Archbishop John Bathersby terminated Fr Kennedy’s appointment starting tomorrow so in an attempt to save his job, Fr. Kennedy tried to rally people to his cause during Sunday Mass because that’s what Sunday mass is for. Around 600 people loudly applauded the priest after his sermon.

“People who are not part of our community will make judgments about us because of our so-called unorthodox behaviour,” Fr Kennedy said. “But we can take heart from the words of Jesus himself, who was judged harshly for his unorthodox behaviour – ‘By their fruits you will know them’.”

Fr Kennedy said St Mary’s was under attack because some felt the congregation puts too much emphasis on social justice and not enough emphasis on spirituality. And because of the dustup, poor Fr. Kennedy’s plan to establish an aboriginal tent embassy on the site has been postponed which must have disappointed the small party of Raelians, who worship alien beings who have allegedly intervened in earthly affairs, who were outside St Mary’s with signs supporting Fr Kennedy.

Kennedy defended himself with the rallying cry that Vatican II confirmed that the battle for justice was at the centre of the Gospels. If you don’t remember that part of Vatican II that dealt with UFO cults and embassy tents, you should probably read “Lumen Gentium” again.