With Pope Benedict’s upcoming trip to Israel, The CMR Institute of Media Studies is instituting the “Hitler Youth” Watch.

Our trained professionals (monkeys who like to pretend to read the newspaper) are standing by and counting the number of times the media is able to include the term “Hitler Youth” into their news reports on Pope Benedict’s trip next week to Israel. 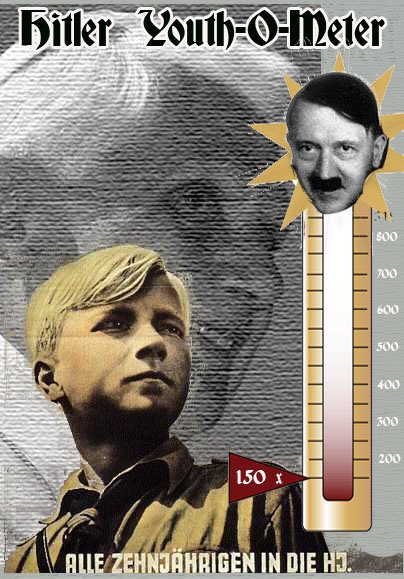 You can bet the media’s going to bring the Hitler. Sometimes they’ll slip it in as a biographical note in the 12th paragraph. Other times the media will play it prominently because some loudmouth mentions “Hitler Youth” because they’ll know the media will cover it if they say it. Other times it will be a “both sides” angle on reporting which will say that some people love Pope Benedict while others blah blah “Hitler Youth” blah blah. You get the idea.

The Associated Press already got their Hitler on when just today they managed to actually compliment the Pope while connecting him with Hitler. Not an easy task. Kudos to the AP for that one. Here’s the sentence from the AP report:

Despite the dispute, Jewish leaders say Benedict, who served in the Hitler Youth corps as a young man in Germany and then in the army before deserting near the end of the war, has an excellent record in fighting anti-Semitism. He has already visited synagogues in Cologne, Germany, and New York and is expected at Rome’s central synagogue later this year.

And there’s sure to be some surprises along the way as to how they fit that little “fun fact” into stories and it’ll be fun to watch.

Now the CMR monkeys are fairly responsible but if you see any interesting mention in the media of “Hitler Youth” pertaining to Pope Benedict, please let us know in the combox.

Update: The media is already up to 245 references to Hitler Youth. This is going even faster than I thought it would.Haaretz has a pretty unfair reference today that seems to forget that joining “Hitler Youth” was mandatory and young Ratzinger was a child.

“We expect that Pope Benedict XVI’s speech at Yad Vashem will include a reference to the memory of the Holocaust in the present as well as in the future,” said Avner Shalev, Yad Vashem’s chairman of the directorate.

Shalev recalled that Benedict spent his childhood as a member of the Hitler Youth and later was drafted into the Wermacht. “It is impossible to claim that these things do not have an impact,” he said. “A person’s habitat bears an influence on him, despite the fact that immediately after the war he disengaged from these things and devoted himself to studying religion.”