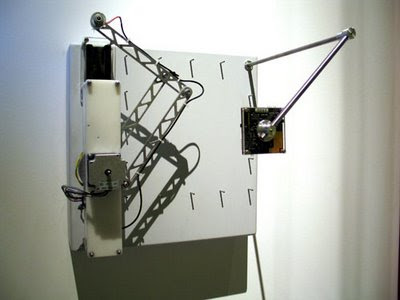 The question here is not what could go wrong but rather what could possibly go right.

Futuristic-looking robots like Honda’s sleek humanoid Asimo don’t cut it for designer James Auger, at the Royal College of Art, London. Believing that they need to fit unobtrusively into the home, he has built robotic furniture. And, believing they need to be useful and entertaining, he has given the furniture an appetite for vermin, like mice and flies.
…
But the robots also have a taste for flesh. They can gain energy by chomping on flies and mice, an idea inspired by researchers at Bristol Robotics Lab, UK, who built a fly-powered robot and have also suggested that marine robots could feed on plankton.

“As soon as there is a predatory robot in the room the scene becomes loaded with potential,”

Loaded with potential you say. I agree. Loads of potential…for the robot. What happens when there are no more mice or flies around, huh? What is the potential then?

First it’ll be hamsters and kittens. But pretty soon we are all merely hairless batteries hooked up to a giant computer dependent on bad actors in leather and latex to rescue us while being chased by Hugo Weavings. Thanks, but no thanks. Been there, done that.

* * *
Reminder! Today is the last day to vote for CMR at the Catholic New Media Awards.