Is Charlie Brown Their Mayor? 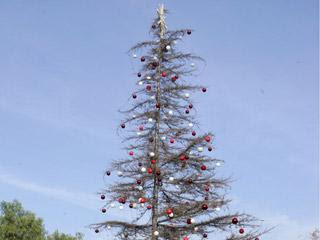 I just can’t stop laughing at this. The tree you’re looking at is actually the city of Concord’s official Christmas tree.

I know times are tough right now but is California suffering a shortage of decent trees too? This is pathetic. Who’s their mayor, Charlie Brown?

Oh Christmas tree, how puny are your branches.

That’s been many people’s first reaction to the lopsided brownish tree decorated by the city of Concord this year.

Officials said budget cuts forced them to forgo a freshly cut, full-bodied tree for one growing in a city plaza. They said the tree is saving the city about $20,000 and is more eco-friendly than a cut one.

While some onlookers described it as pathetic, scraggly and a sad reflection of the bare economy, it is finding supporters.

Officials called it their Charlie Brown tree, named after the one picked out by the Peanuts character who also was mocked for his choice. Officials said that tree reminded the characters of the spirit of the season, and hope the Concord one does too.

I love that they’re embracing the Charlie Brown mythos to make themselves feel better. Blockheads!