The “Plywood over Jesus” Precedent 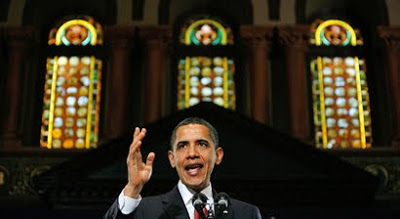 Don’t anyone dare act surprised. There’s clear precedent for this. Remember when the White House asked Georgetown to cover a a gold “IHS” monogram symbolizing Jesus’ name with a piece of black-painted plywood while Obama gave his speech?

Well that was just the beginning.

Religious organizations can continue doing all their nice little charity work thingies but the federal government is considering forcing them to stop being so…well…religious.

According to OnFaith blog, Obama’s faith council is debating forcing religious charities to cover up any and all religious icons if they receive federal funding.
OnFaith reports:

Obama’s faith council is finalizing its draft report this week, and one of the key debates that emerged from the phone conference yesterday was whether there should be rules requiring religious groups to cover up religious symbols if they receive federal funding for services. For example, if a church gets money for a soup kitchen, would it have to remove or put a cloth over all crosses, pictures, etc., every time it gets ready to feed the hungry?

That sparked a lively debate among council members that largely dominated yesterday’s two-hour teleconference. Melissa Rogers, director of Wake Forest’s Center for Religion and Public Affairs, who is leading the group tasked with solving such church-state issues laid ouit three possibilities the council could recommend:
1. Making such religious icons not allowed for federally funded services.
2. Allowing it only if no other religious neutral rooms are available and covering up such icons is impractical.
3. Not requiring removal of such icons but encouraging religious orgs to be sensitive about the issue.

So remember when Obama said he decided to continue President Bush’s funding of faith based organizations, I’m pretty sure that this White House continued it only so that the money could be used as a Trojan Horse that could destroy or at least secularize religious organizations.

How many religious organizations will accept this money as a means to do good only to have the moral basis for that good removed.

Catholic schools should be especially wary right now. And if there’s ever been a reason to fear vouchers, this is it.

In the end so many of us have already accepted that the larger government grows the less room it will leave open to religion. We must accept that the ire of the administration is focused squarely on those bitter people clinging to guns and religion. We should only pray that religious organizations continue to ask themselves “What good is it for a man to gain the whole world, and yet lose or forfeit his very self?”