Showdown at the March for Life? 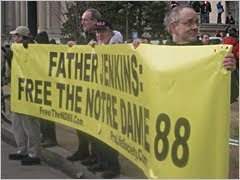 OK. I was kind of back and forth on this one for a while.

Fr. Jenkins, President of Notre Dame, who infamously invited and honored President Barack Obama on campus last year, joined hundreds of thousands of pro-lifers this week in protesting Roe V. Wade at the March for Life. And in a strange turn he also met some pro-lifers protesting him.

According to the Thomas More Society, Jenkins:

“came face to face with large banners urging him to “Free the ND88″ and many thousands of leaflets also calling out for his taking steps to end criminal prosecutions of the “ND88.”

Many folks are upset that Jenkins has not asked Notre Dame officials to withdraw the charges against the 88 pro-life protesters arrested on campus for protesting the Obama speech.

And initially I thought that maybe that wasn’t the time and place for that kind of action. And as much as I’ve taken issue (some say too harshly) with Fr. Jenkins’ decision to honor Obama, part of me wondered if the March for Life was the proper venue to go against a fellow marcher publicly. The March for Life is important and I’m not sure airing our grievances with each other during it is productive.

I thought that if I’m carrying a sign during the March for Life (which I have done) I’m going to be sure to make it about protecting human life.

But then I read Fr. Jenkins’ comment to LifeNews.com said:

“I felt it was important not to let those banners take away from the central goals of the day,” he said. “And I refuse to let them distract from advancing pro-life cause.”

You’ve got to be kidding me. Fr. Jenkins refuses to let them distract from advancing the pro-life cause? Give me a break! That’s absurd. The whole country was watching when this priest hung an award around the most pro-abortion President’s shoulders. Pro-lifers begged Fr. Jenkins to advance the pro-life cause by refusing to honor the President who publicly said he would kill his own grandchild when he said he didn’t want his daughter “punished with a baby.”

This entire (ongoing) episode is a terrible stain on Notre Dame’s reputation as well as the Catholic Church and Fr. Jenkins should be embarrassed by his actions.

But Fr. Jenkins ignored us all. Fr. Jenkins said he wanted dialogue. Well, now he’s got dialogue from people and he calls them a distraction? You know, I’m starting to think that when Fr. Jenkins says “dialogue” he actually just means for everyone to shut up and listen to him.