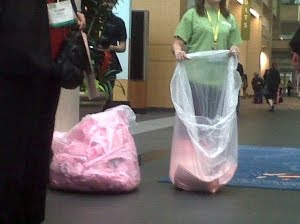 In their never ending quest to ensure that nobody knows what a baby in the womb looks like feminists at a women’s conference confiscated bags which were deemed pro-life even though nothing in the bags even mentioned abortion.

Attendees from around the world streamed into the Walter E. Washington Convention Center in the nation’s capitol on Wednesday morning for the third day of the second global Women Deliver conference, carrying pink bags with the inscription: “Celebrate Motherhood.” But conference organizers made sure the pink bags, and the information they contained, barely made it inside the doors.
The bags were offered by a small band of staffers and interns led by Jeanne Head, R.N, an experienced labor and delivery nurse, who serves as National Right to Life Vice President for International Affairs and also NRL’s United Nations Representative. They arrived outside the convention center at 8 am, and were promptly asked to move across the street.

After about an hour, an attendee from Uganda walked across the street to ask for another bag. She had actually wanted to read the contents, she said. It was at this point that the staffers discovered from the Ugandan attendee that conference organizers were confiscating the bags and throwing them away.

According to the Ugandan attendee, conference organizers were heard telling attendees that the pink bags contained information that was “anti-human-rights,” “anti-choice,” “anti-life,” and “anti-woman.”

And so it was for that hour that the staff was outside the convention center: attendees received the pink bags, walked across the street, and only to be required to dispose of them inside the building by conference organizers. (And from that point on, conference organizers began inspecting every bag being brought in because, in their words, the conference had been “infiltrated by anti-abortionists.”)

What was inside the pink bags that warranted such an immediate, censorious response?

The “Celebrate Motherhood” bags contained a small plastic fetal model of a 12-week-old unborn child, a small replication of an unborn child’s feet at 10 weeks gestation, a brochure on prenatal development, and a brochure containing information on proven means of reducing maternal mortality rates worldwide (the supposed focus of the conference).

And these are the people who are supposed to be all about choice?

Sponsors of the conference include the United Nations Population Fund, USAID, UNICEF, the World Health Organization and the International Planned Parenthood Federation.

Ironically, the website of the Women Deliver conference says that the conference will “expand on Women Deliver’s hallmark of inclusivity, reaching out to new partners and new communities.” Ha!