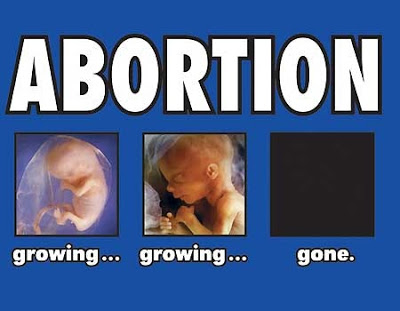 David Hudson writes writes for the First Amendment Center about a young girl who told by her school to remove a t-shirt that had a pro-life message on it.

A dress-code dispute over an anti-abortion T-shirt will head to trial in late August, after a federal district judge said it was an open question whether officials prohibited a student from wearing her shirt with pictures of fetuses because of its viewpoint or because it was too graphic.

In April 2008, a sixth-grade student at McSwain Union Elementary School in Merced, Calif., wore an anti-abortion shirt during the week of state standardized testing.

The shirt featured the word “ABORTION” on the front with three squares below it. The first two squares showed images of fetuses and the third was black. Below the three squares was the caption, “growing, growing … gone.” The back of the shirt read: “American Life League’s Sixth Annual NATIONAL PRO-LIFE T-SHIRT DAY April 29, 2008 www.ALL.org.”

It looks like the school said that the shirt violated the school dress code. But the First Amendment Center quotes the school policy as:

“Personal articles, clothing, or manner of dress shall make no suggestion of tobacco, drug, or alcohol use, sexual promiscuity, profanity, vulgarity, or other inappropriate subject matter.”

The judge, presiding over the case, refused to toss the case when requested to do so saying there was evidence for both sides.

“Plaintiff alleges that Defendants censored Plaintiff’s expression due to the fact that her t-shirt advanced a pro-life message, and there is some evidence on the record sufficient to support such an inference,” Wanger wrote.

However, he also said the school officials presented evidence that “the restriction imposed on Plaintiff was not based on the viewpoint expressed by Plaintiff’s shirt, but rather on the graphic pictures contained on it.”

The judge also said it was an open question whether school officials could show that the anti-abortion shirt would have disrupted school. That would seem to me to be the school district’s best argument here.

Remember, free speech is only for those who agree with the state. Everything else is shouting fire in a crowded movie theater.