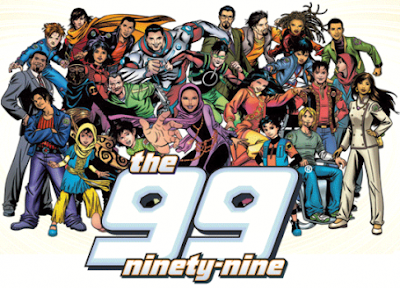 This is crazy. Discovery Kids is renaming itself “Hub” and announcing a new show about superheroes your kids will love -if they’re into Sharia Law and all that. You know -Truth, Justice and the Islamic Way.

Hide your face and grab the kids. Coming soon to a TV in your child’s bedroom is a posse of righteous, Sharia-com pliant Muslim superheroes — including one who fights crime hidden head-to-toe by a burqa.

These Islamic butt-kickers are ready to bring truth, justice and indoctrination to impressionable Western minds.

Scheduled for release on the new network The Hub — formerly Discovery Kids — which launches today, is a cartoon beloved in the Arab world and received timidly in Britain last year, “The 99.”

The program chronicles the adventures of 99 superheroes, each of whom embodies an attribute of Allah.

Jabbar is a Muslim Incredible Hulk. Mumita is wicked fast.

How many parents are going to plant their kids in front of the television and allow their children to watch this thing just because it’s a cartoon and never question it until their kids are asking for a burqa for Halloween.

Don’t worry though Christians we’ll always have Bible Man played by the…uhm…troubled Willie Ames who recently joined Oceania Cruises as a member of the Entertainment staff after selling all of his stuff on his front lawn to fend of foreclosure.