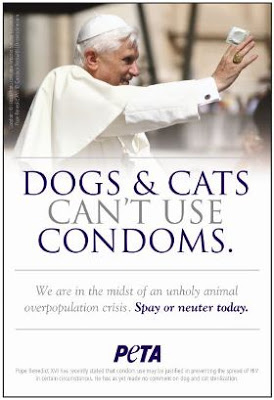 The crazies at PETA, who once compared chicken farms to the holocaust, are now using a photoshopped image of the Pope handing out condoms to encourage people to neuter their animals.

I can’t even imagine what advantage can be gained by using the Pope’s image other than raising a ruckus by attacking the Church. But isn’t that what this is all about anyway. They know they’ll never be criticized by the mainstream media for insulting the Pope so it’s a free shot. The ordinary ministers of the media will chortle, enjoy the insult, and report on it with serious faces. Because after all wasn’t it them in the first place who misreported what Pope Benedict’s statement actually meant.

So for those who aren’t paying attention here’s how it goes
1) The media misreports the Pope’s statements about condoms.
2) Liberal group insults the Pope using the media’s misreported statements.
3) The media reports the insult as a way to have a “debate” while actually giving free publicity to group they like a lot more than the Church.

Visitors to the Vatican yesterday were the first to receive our new “Pope Condom” campaign leaflets, which we’ll also soon be taking to cathedrals and churches across the U.S.

Simply stated: It’s sinful that millions of dogs and cats are killed every year in animal shelters simply because there aren’t enough homes for all of them—and that millions more are abandoned on the streets, where they starve, die of untreated injuries or illnesses, or fall prey to animal abusers. The simple solution is to always spay and neuter animals instead of allowing them to produce countless offspring. Please help us bring salvation to dogs and cats by singing the praises of spaying and neutering to everyone you know.

I don’t believe for a second there’s any effort at all to get these out into churches as PETA claims but this is all intended to get the attention of the media and more attention to PETA. Shameless.