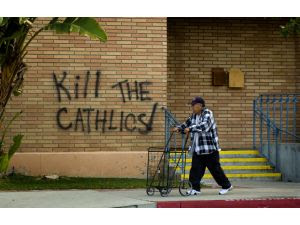 As if there weren’t enough evidence we were failing our kids with our education system, and now this shocking public display of ignorance!
The OC Register reports:

Police were called Tuesday morning to investigate a report that “Kill THE CATHLICS!” was spray-painted on a wall near the entrance of St. Boniface Catholic Church.

About 7:15 a.m., police were sent to the church at 120 N. Janss St. regarding the incident on the west side of the church, police said.

Oh my, kids today can’t even spread hate without embarrassing themselves. It’s a shame really. I blame the Republicans for not pouring more money into the system.

Now it could be that this was some kind of self referential art mocking hatred of “Cathlics” and it’s a brilliant satire of anti-Catholicism in that it cleverly reveals the trusim that many people don’t hate the Catholic Church but hate what they mistakenly believe about the Church. So by spelling “Cathlic” wrong the artist here is simply showing that hatred of “Cathlics” is based in ignorance of what “Catholicism” really is.