7 Reasons Obama and The Easter Bunny Are Frighteningly Similar 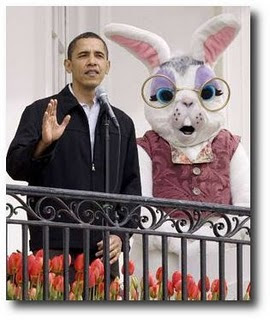 I saw this picture and thought “Oh the Magical Imaginary Beings Convention was TODAY?” Darn it. I missed it again. But at least this pic was taken of Barack Obama and the Easter Bunny. It got me thinking that the similarities between the two are pretty remarkable. Here’s the top 7:

1) It’s difficult to trace the origins of both Obama and the Easter Bunny.

2) Both exist only in the minds of the immature.

3) Both pull things from out their @$$ and expect you to freak out and be thankful.

4) Both leave gifts for people regardless of merit. No naughty list. Nothing. Whoever wants treats gets treats.

5) Hollywood is enamored of both.

6) Both claim a connection to Christianity but there’s little evidence of how.

7) Both like to play on green pastures around holes.

If you’ve got more similarities please add them in the combox.

HT for the pic from Sorry, All the Clever Names are Taken