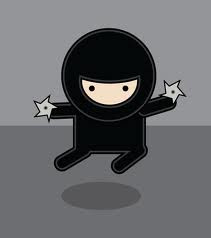 Walking through our local mall the other day, my six year old saw some things he wanted. No. Not wanted. Needed. And when I say “some” I mean he pretty much wanted anything that had any color on it whatsoever.

So eventually we walked past a toy store. Dumb move, I know. But it was walk past the toy store or Victoria’s Secret. I tried to distract him from the shiny toys but it’s like trying to distract a moth from a flame. He pointed to a number of things like swords, daggers, and a mask displayed in the front window but I kept pulling him along past the store.

I told him “No more toys until Christmas.”

What?! He looked at me incredulously. “These aren’t toys. This is Ninja gear!”