The Robopocalypse Will Be Brought to you by Harvard 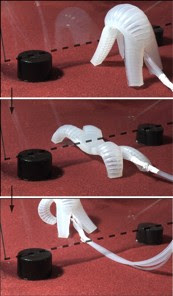 The apocalypse will be brought to you by Harvard University. Seriously, did you ever think it would come from anywhere else?

Harvard researchers just announced that they’ve built a flexible robot that can crawl and slither under a pane of glass and into your home thus making your ability to hide out in your home and ride out the apocalypse about…bupkis.

Harvard scientists have built a new type of flexible robot that is limber enough to wiggle and worm through tight spaces.

It’s the latest prototype in the growing field of soft-bodied robots. Researchers are increasingly drawing inspiration from nature to create machines that are more bendable and versatile than those made of metal.

They say this is great news for people trapped in mines and such things. And it is, I guess. Hey, I’m glad for all the trapped miners who will have bendable robots to keep them company as they suffocate but do you doubt that one day these bots will be sneaking into your homes and unlocking the door for other robots with other specialties like…I don’t know…crushing larynxes?