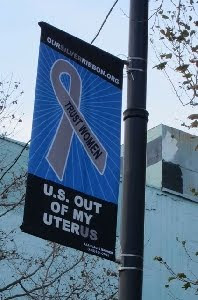 How creepy is this? The city of San Francisco is hanging pro-abortion banners from street lamps like this one.
The Life Legal Defense Foundation is challenging the City of San Francisco for hanging these death banners, saying it’s a violation of the city code.

Remember the days when United States flags hung from lampposts or maybe something commemorating a big anniversary of the town or maybe a local college. But a flag saying, “Yay, we love us some baby killin’.”

What the heck is wrong with these people?

As a press release from the Life Legal Defense Foundation says,

The city regularly authorizes the display of banners to promote “city-sponsored,” “city-funded,” or “city-wide” events or “series of related events of interest to a significant portion of the residents of San Francisco and/or tourists.”

But these banners, as they point out, are blatantly political statements, like “U.S. Out of My Uterus,” “Reproductive Rights are Human Rights,” and “San Francisco is Pro-Choice,” slogans.

I’m thinking it’s no coincidence that the March for Life in San Francisco is scheduled to march right up that street.

In the end it comes down to this. San Fran is going to do what San Fran does. Their death fetish is well documented. The question is what city or towns in America are gutsy enough to do the exact opposite thing and put up pro-life banners and then endure the mass freakout from atheists, secularist, environmentalist and the media. (Wait, is that redundant?)

These past few years have shown us that the pro-abort officials are far more committed to a culture of death than pro-life politicians. Remember, Obama and his minions have shown time and again that funding death is their top priority. Remember when conservatives were threatening a shut down of the government over funding of Planned Parenthood. Obama said “go for it” because for them that’s the line that none dare pass. Death must be funded. They were willing to shut down the government in order to fund Big Abortion. And it became sadly clear that pro-life elected officials were not willing to shut down the government to make sure taxpayer money didn’t fund abortion.

Until pro-lifers match the passion of the death fetishists we’re going to keep losing. We’ve made great advances recently but we can not stop. We must be proudly and in your face pro-life. We must not blanch. We can not defer. There can be no trade-offs. This is the issue. This is the fight. This is the line in the sand. There is no greater issue. It is literally a life or death situation. Act like it.