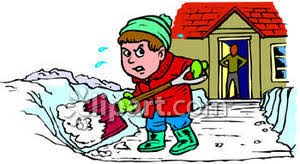 Years ago, I had a neighbor who was a nice guy. I’m sure he’s still a nice guy. He’s just not my neighbor anymore. Our houses were right next to each other and we shared a driveway.

So anyway, one day he warned me that his wife’s brother was moving in for a while and he’d gone through a rough time because he had really bad anger issues. He didn’t explain fully but he said police had to become involved.

So during our first snowstorm that year I go out to shovel with two of my children who essentially just threw snowballs at me while I shoveled. I go out into the driveway and see my neighbor’s brother in law shoveling snow from his side of the driveway to mine.

So we opted for building a snowman with the kids until he went back inside.

Later, I found out he told my neighbor that I was a lazy SOB who didn’t even help him with his half of the driveway. Hahahahaha.