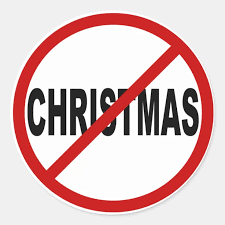 Todd Starnes reports that employees of Kings County in Washington have received warnings to not decorate their offices or workspaces with Christian and Jewish decorations for Christmas or Hanukkah.

Tell me again how there’s no war on Christmas.

“Some employees may not share your religion, practice any religion, or share your enthusiasm for holiday decorations. Displays of religious symbols may only be displayed in an employee’s personal workspace. Religious symbols should not be displayed in or as a background to an employee’s virtual workspace,” read the memorandum obtained by the radio station.

No Nativity scenes or Menorahs. Crosses and Stars of David are also allegedly on the county’s naughty list.

Black Lives Matter buttons and Gay Pride flags seem to be fine, but the Baby Jesus is not.

King County says it’s about honoring the diversity of its workspace.

Pine trees are okay — and so are snowflakes and holly – provided they are not decorated with religious symbols.

But here’s the catch — the ban applies to both in-person workspaces and virtual workspaces. In other words – your home office.

The Family Policy Institute of Washington says the ban is akin to totalitarianism.

“This totalitarianism is antithetical to the type of government that the Founding Fathers instituted – one that respects natural, God-given rights, like freedom of religion,” the institute stated.

I wonder how many Jewish employees they’re going full Kanye on? Or is this a matter of them throwing that in there so as to make it seem like they’re not just going full on anti-Christian?

According to the internets, Jews makes up about 2.5 percent of the population there. Something tells me that this rule didn’t come up because they were seeing too many menorahs, unless Kings County is run by the Minister Farakhan.

You’ve gotta’ love how they ban religious expression in the name of “diversity.” Do they even hear themselves? Or are they beyond caring what they sound like? Are the masks off? Do they not even care about plausible deniability anymore?

Guys, this is no longer slippery slope stuff. This is the power of the state banning symbols of Judaism and Christianity.