The Church Is Out of Touch 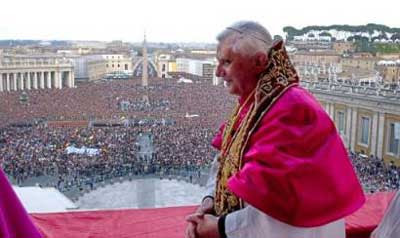 Just days ahead of World Youth Day, a poll by social networking giant MySpace brands the Catholic Church “out of touch” with young Australians.

As you can imagine, the online poll which found that 77 per cent of the 14-24 set felt the church was out of touch with them, was reprinted breathlessly all over the continent even as Sheperd One landed in Sydney.

More than half (53 per cent) also said they would not participate in World Youth Day events because of the church’s stance on sexuality. 89 per cent overall rejected the Catholic Church’s teaching that they should remain virgins until they married.

This story about the “out of touch” Pope often came in the same newspaper which reported that thousands of pilgrims surrounded the airport just to get a glimpse of the Pontiff.

Pope Benedict is the only man in the world who can receive this kind of crowd and be called “out of touch.”
But I’m not sure being out of touch is such a bad thing, anyway. Because only something which stands outside of one can possibly be “out of touch.” I think the problem with so many churches is that they couldn’t possibly be out of touch because they are only an amalgamation or a reflection of one’s own desires and wants. They can’t call us out of ourselves. They can’t inspire us to be better.

I am reminded of a piece I recently read on a critics view of James Joyce.

He accused the great novelist as having reproduced the very thing he had rebelled against by creating, in opposition to the church’s authoritarian majesty, “a towering Gothic prose cathedral”.

This “most democratic of writers”, Simmons argued, had ended up making his own church: “So the people cower/ coming near his creation and sidle in, astounded,/ and wait for official experts to show them round it.”

I think that in many ways, many of us create our own churches. We create our own personal towering spires to inspire us, our own gargoyles to frighten us, and our rituals and traditions to comfort us. But in the end, it is just us. And although these individually sized Churches have the advantage of never being out of touch with their creators they fail to inform, inspire, frighten or even comfort in any real sense.