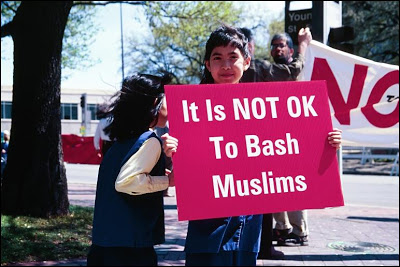 President Barack Obama has outrageously criticized a Muslim nation for its war crimes, torture, misdeeds of its past leaders, imposing its will on sovereign countries, racism, greed, its arrogance, its dismissiveness and being derisive.

Of course that Muslim country is the Islamic Republic of America. You see, Obama, who recently announced that America is not a Christian nation, said yesterday that America is one of the largest Muslim nations.

So CMR acknowledges that the President has now deemed us a Muslim nation, so we join the Muslim street in their outrage that President Obama has dared to so blatantly and repeatedly criticize a Muslim nation. We ask why has Obama bent over backwards praising every other Muslim nation while singling this one out for constant criticism?

As a Muslim nation, we would expect that someone who grew up in a Muslim family, lived in a Muslim country, and attended Muslim schools would understand the damage of such intolerant anti-Muslim country rhetoric.

The recent vicious rhetoric has the Muslim street pining for President Bush who liberated Islamic countries while Obama berates this Islamic country.

And the Muslim street is not going to stand for this. We will rise up against such outlandish slanders against this Islamic country.

No justice. No peace.