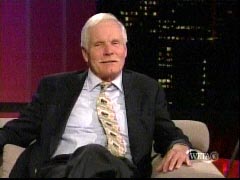 CNN founder Ted Turner, who thinks Christianity is a “religion for losers,” apparently believes that the Gulf oil spill could actually be God sending us a message that drilling for oil is bad. Will media liberals read him the riot act as they have Sarah Palin for making similar claims?

“I’m just wondering if God’s telling us he doesn’t want us to drill offshore,” Turner told a CNN interviewer. Recent coal mine disasters, Turner said, may also be signs that “the Lord’s tired of having the mountains of West Virginia — the tops knocked of of ’em so they can get more coal. Maybe we ought to just leave the coal in the ground and just use solar and wind power.”

OK. What message then
was God sending with Katrina, was it an anti- New Orleans message. Anti-jazz?

Or how about that tsunami that killed thousands and thousands. What message was being sent then?

How is what Turner said any different from Pat Robertson’s statement that Haiti was being punished with a good ol’ fashioned smiting from God?

Newsbusters writer Lachlan Markay asks where’s the media outrage over this comment. Why aren’t they as upset with Turner just as they were upset over Sarah Palin’s statement that the construction of an Alaska natural gas pipeline was God’s will.

These are, of course, rhetorical questions.