This Was Covered. This Was Mostly Ignored

This protest outside the Scripps Spelling Bee was covered by the mainstream media. The protest was two or three people urging that English words should be made less difficult to spell. They said words like “enough” should be spelled “enuff.” And it received coverage!:

But a protest this weekend against a mega mosque being built near the site of the World Trade Center was largely ignored by the media: 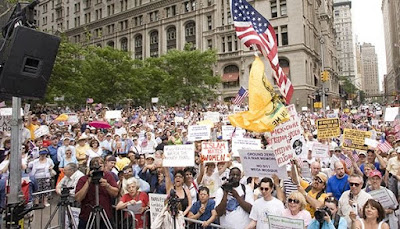 Wait. The coverage that the protest did receive wasn’t totally accurate even. CNN did a story about the protest and reported that about 200 people were present. I ask you, does this look like 200 people? Newsday had it at about 350. Gimme a break.

At some point we all just have to say enuff.

Update: Atlas Shrugs has all the information you might want about the mega-mosque being built near the WTC site.

If you’re interested in more info on the word spelling protesters see Gormogons.

Leave a Reply to Matthew A. Siekierski Cancel reply