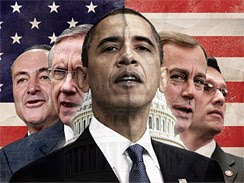 How can CBS News explain this photoshopped picture? What possible explanation could they have?

Accompanying their election coverage on their website, CBS published this photoshopped picture of a half black/half white President Obama with Republicans and Democrats on either side of him as if to say he is split between the two.

Needless to say Obama’s white side is on the side of the GOP’s John Boehner and Eric Cantor. His black half is on the side of Harry Reid and Charles Schumer. Are they saying that Obama will have to act white with Republicans?

How could anyone think that changing the President’s skin tone like this would be a good idea? This has got to be either one of the most racially insensitive and just plain ol’ stupid photoshops a major news organization has done since Time Magazine blackened OJ Simpson’s face. The idiocy of this is only heightened by the fact that Obama’s heritage is mixed.

Who knows who did the actual photoshopping but the pic can be found at CBS News website.

(CMR HT to frequent reader Paul Schneible for bringing this to our attention.)