Watch Out for Rick Perry’s ARMY OF GOD!!! 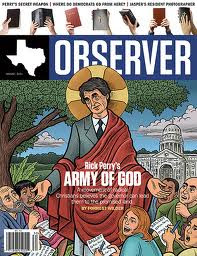 Oh my goodness, start hiding atheists in your basement. Governor Rick Perry is mounting an ARMY OF GOD intent on taking over the country. Watch out!!! He’s going to establish himself as the head of a theocracy. How do we know this? Why, he prayed publicly so it’s clear that he’s cuckoo.

For a glimpse of how bad the fear of Perry’s religion is, check out the magazine cover of the Texas Observer today.

The Chicago Sun Times even ran an editorial that began, “Evidently, Rick Perry is a Christian. But does he have to make such a big deal out of it?”

You’d never know that Obama says he’s a Christian. In fact, according to US News,

“President Obama on Wednesday prayed with several Christian leaders to find an answer to the debt ceiling crisis that doesn’t undercut federal programs to the poor.”…And at one point in the following discussion, the president referenced Matthew 25 from the Bible in praying that the cuts envisioned by his negotiating team don’t fall on “the least of these.”

Didn’t hear the media getting bent all out of shape about the infusion of religion into politics on that one, did you?

Obama has often mentioned Jesus’ Sermon on the Mount (including at Georgetown University) to make the case for his economic policies. In fact, the Politico ran a piece entitled “Barack Obama invokes Jesus more than George W. Bush.”

So why is there no worry about Obama infusing religion into his politics? Ah, that’s easy. Because the media believes that Obama’s Christianity is only used to advance his politics while they fear that Perry’s politics are actually informed by his Christianity. In short, he means it. And that scares the heck out of them.