98% of Catholics Don’t Look at the Crucifix 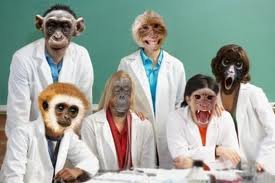 You might recall the legal complaint filed against The Catholic University of America by a law professor at a nearby school on behalf of Muslims.

The complaint alleged that Muslim students couldn’t pray whenever they wanted because there were all those darn crosses up everywhere. The complaint was tossed from Washington D.C.’s Human Rights Commission but CMR may suggest that after it’s recent study is published, perhaps the federal government could step in and mandate that CUA remove the crosses.

The study, done by a gaggle of monkeys rented by CMR Labs, proves beyond a doubt that 98% of Catholic students who walked by the crucixies in the hallways and rooms of Catholic University didn’t even look at the crucifixes and crosses.

“98 percent of Catholics ignore the crucifix altogether,” said one researcher. “If they’re not paying attention to the cross, why should the school be forcing its religious beliefs down the throats of students from other faiths?”

CMR’s liberal theologian on staff said that only “a very small minority of Catholics ponder the mystery of the cross at all anymore.”

The study isn’t technically scientifically definitive in that we could only afford to rent the monkey researchers for an hour and a half but we believe it’s just as reliable as other studies claiming to definitely say what Catholic do or don’t do.

“What right does the Catholic University have to impede on my life when 98 percent of Catholics don’t even look at the cross?” demanded one made up person whom we didn’t speak to because that would require getting off our couch.

Another pretend student said she was shocked to find so many crucifxes on campus when she first attended as a freshman. She said she knew she was going to a Catholic school but she didn’t think it was THAT Catholic. “I don’t think the college has the right to shove their religion down my throat,” she said. “Isn’t that like a violation of the separation of church and state or something?”

We attempted to reach Nancy Pelosi in order to secure funding for further research but her aide said no further research was required and they would gladly quote our 98percent figure in the future and it would not be questioned at all by the adoring media. The aide predicted that within a few days, talking heads on MSNBC would be quoting the study as fact.

An anonymous aide to the President said that in a second term he could foresee the administration taking on this very important issue. “It’s not an issue of religious liberty at all,” he said. “It’s a matter of the Church not being allowed to force Catholics and non-Catholics to view crucifixes.”