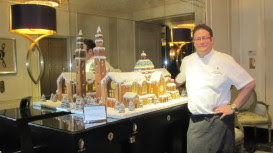 Over at the Four Seasons in Georgetown, pastry chef Charles Froke has taken the concept to a whole other level: He’s managed to re-create the Basilica of the National Shrine of the Immaculate Conception.

This past Thursday I made a pilgrimage to the gingerbread basilica—it is nothing short of a miracle. Holy gingerbread house! I didn’t think it would stand a prayer. (The above was my long-overdue homage to the late Gene Shalit. He will be missed. And yes, I’m done with the puns.) But seriously, it was impressive. Froke, a very modest patissier, told me it took him 70 hours to build the church, which required 125 pounds of gingerbread dough—and not the kind you use for cookies but rather something less savory, more sturdy—along with 45 pounds of icing, 10 pounds of chocolate for the trees, 20 pounds of sugar, and even a pound of coffee extract to color the icing.

You can read more at The Weekly Standard.

HT Photos from The Georgetown Patch