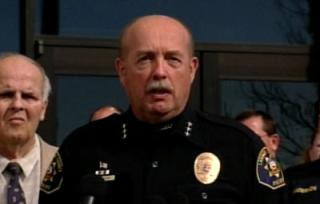 This is kinda’ awesome. Larimer County sheriff Jim Alderden is old school. You might remember him because he investigated the whole Balloon boy fiasco. Well, if you thought that the balloon boy was a scandal wait for this. The past few years Sheriff Larimer has had a real live Christmas tree on gummint property.

Well, as you can imagine, a few obviously very tense elected officials and lawyer types went Grinch on him a few years ago about it and recommended that nobody should put up any Christmas decorations. Well, they asked the wrong Sheriff to cancel Christmas.

Not only did he refuse to take down the decorations. He decided to throw a Christmas tree trimming party.

Well as you can also imagine, two atheist groups got wind of the Christmas shenanigans and demanded the party’s cancellation.

Well, major CMR kudos and huzzahs to Sheriff Jim Alderden who not only refused to cancel the party but went one step further. He invited the atheists to what he calls his “politically incorrect” Christmas Party. You see, us Christians types always makes some room in the Inn for folks lost in the desert.

He told them he had a “big, empty spot for the atheists” at Saturday’s party.

But instead of showing up KDVR reports that “the Colorado Coalition of Reason decided to erect a sign urging people to illuminate their minds with reason during the winter-solstice season.”

They can erect all the signs they want. A Christmas party sounds like a lot more fun to me. How ’bout you?